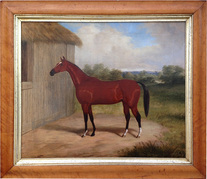 Boirado
Oil on canvas, 75 x 62 cm
Inscribed with title on stretcher and signed,
“S. S. Knights, Geelong, 1858”
Samuel S Knights was an early colonial artist who specialised in painting the portraits of prize animals and his importance as an artist is indeed recognised with the commission he received from Mr Thomas Austin in 1858 to paint his recently purchased thoroughbred stallion, Boiardo, “ a horse possessing fashionable blood and pretensions of any that yet has crossed the line” (Bells Sporting Reviewer, 1/5/1858).

Boirado had been imported into the colony by the bloodstock agent James Purvis after being purchased from the Earl of Derby. Thomas Austin paid  1,400 at auction, a huge sum for the times, for a horse that was to become one of the great sires in Australian horseracing. Boiardo stood at stud on Austin’s property, Barwon Park, near Geelong in Victoria. His progeny included many major stakes winners including Melbounre Cup, VRC, AJC and QTC Derby’s, St Leger, Champion Stakes, Australian Cup and many Metropolitan Handicap winners. When purchased by Austin in 1858 Bells Life in Sydney and Sporting Reviewer noted that Mr Austin, a liberal sportsman and careful breeder, was setting aside 1500 acres of his best land to make accommodation for mares and that stud owners should get their names in Boiardo’s book early, with the stud fee being 20 guineas (1/4/1858).

Thomas Austin settled in the Geelong region of Victoria in 1837 and developed a 29,000 acre pastoral property on the Barwon River. He became a prominent citizen and pastoralist in the colony and developed extensive horse racing interests, often being described as the Father of the Turf in Victoria. He was the impetus behind many of the Race meetings in Victoria and was a founding member of the Victorian Racing Club. The Austin Hospital in Melbourne was established by his widow and is named after him. His claim to infamy though may be that he is credited with introducing the rabbit into Australia for hunting purposes!

The painting itself has an interesting provenance. Boiardo’s portrait was painted for Thomas Austin in 1858 and would have been commissioned to celebrate the purchase of such a fine and important stallion. In  1876 a progeny of Boiardo, also named Boiardo (from Merry Maid by Jersey) travelled through northern Tasmania and at this time John Field of Calstock bred from Boiardo and built much of his bloodline stock from this line. John Field was another famous thoroughbred horseracing breeder and he himself was the owner of many successful horses, including the 1884 Melbourne Cup winner Malua. The portrait of Boiardo would have been acquired by John Field in recognition of the bloodline of his breeding stock and it has remained in the Field family by descent until now.