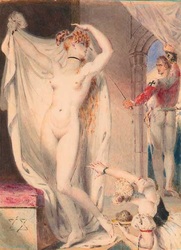 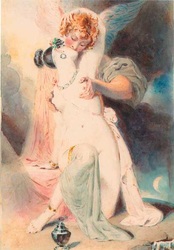 Thomas Griffiths Wainewright was born in London in 1794 and was provided with an upper-middle class upbringing and education by his grandfather after his parents death. His grandfathers house was to provide Wainewright with literary and artistic influences which would effect him for the rest of his life. Visitors to the house included such intellectual thinkers as Josiah Wedgwood, Mary Wollstonecraft, William Blake and Henry Fuseli.

Wainewright was to develop his interests in collecting and art at an earlyage and he is known to have had an apprenticeship to the portrait painter Thomas Phillips, a member of the Royal Academy, in 1813. John Linnell is also claimed to be one of his teachers. He was to go on to exhibit at the Royal Academy from 1821 - 1825 with the influence of Fuseli and the nineteenth century romantic style evident in his works, such as the Subject fom the Romance of Undine exhibited in 1821. He was also a journalist and social commentator of note, writing literary criticisms and exhibition reviews for such journals as the London Magazine.

In 1837 Wainewright was tried for forgery and sentenced to Transportation,while also being under suspicion after the mysterious deaths of his grandfather, mother-in-law and sister-in-law. These actions resulted in anotoriety for Wainewright that was to be widely scrutinized throughout the years in books and commentaries base on his life by such authors as Charles Dickens, Oscar Wilde and the present Poet Laureate Andrew Motion.

Wainewright arrived as convict 2325 on the Susan at Van Diemans Land in 1837. By 1840 he was working at the Colonial Hospital in Hobart Town and it was here that he was befriended by the assistant surgeon Dr. Robert Kennedy Nuttall. Dr Nuttall was to see Wainewright everyday for the four years he was in the colony (1840 - 1844) and encouraged him in what must have been a very different position to that which Wainewright had held as a dandy and dilettante in early nineteenth century England and France. Dr Nuttall must also have encouraged Wainewright's painting and was to form a comprehensive collection of his works. Wainewright painted portraits of the members of the upper echelons of colonial society, as was demanded by the populace of the time, but he was also to continue to paint in the romantic style he had practiced in England and succesfully exhibited at the Royal Academy. This is how Dr Nuttall obtained the two watercolours The Reunion of Eros and Psyche and Lothaire of Bourgogne Discovers the Amour of His Wife with the High Constable.

These watercolours are very different to the usual landscape and portrait paintings done by the colonial artists of the time, and are distinct in their romantic style and the high level of skill with which they were painted. They also confirm that Wainewright's links with Fuseli remained even in the squalor of colonial Hobart Town. The elongated mannerisms and neo-classical lines are evidence of this while the subtle eroticism evident in the works is very rare for Australian paintings of this period. The Reunion of Eros and Psyche is a subject taken from Apuleius's Golden Ass while Lothaire of Bourgogne Discovers the Amour of His Wife with the High Constable illustrates a scene in Barrault's Histoire des Ducs de Bourgogne.

Interestingly, Dr Nuttall was to comment to his son, Professor G. H. F.Nuttall, that he remembered watching Wainewright paint the wife of Lothaire. In the story, related by Curling in his book on Wainewright, when the doctor complained about the unnatural length of her neck Wainewrightput the black band around it with a single deft stroke of his brush. When relating the story Dr Nuttall made a slashing movement as though using a knife to cut a throat, with a fierce expression on his face. Dr Nuttall has inscribed in pen on the back of the watercolour this observation. The back of each work is also inscribed in pencil with their title, and on comparison with Wainewright's handwritten Petition for Release, which was submitted in Hobart, it is evident that the artist has written the words himself.

The Reunion of Eros and Psyche and Lothaire of Bourgogne Discovers the Armour of His Wife with the High Constable are extremely rare Australian colonial artworks on many levels. Wainewright counted amongst his friendsand acquaintances in England such artists as Sir David Wilkie, Richard Westall, David Flaxman and Sir Thomas Lawrence, to name but a few, and this contact was to provide him with experiences and influences that were uniquefor the Australian society of the period. The artistic lessons obtained from these relationships contribute highly to his present recognition as one of most skillful of the colonial artists of the period. The fact that Wainewright was a convict, with the obvious constraints this entailed, and the small number of works known to exist by him makes the existence ofthese works even more amazing. Very few romantic genre paintings survive inthe whole colonial oeuvre and to be able to provenance any colonial workback to its origins, as in the case of these two watercolours, is extremely rare. When the amazing life of Thomas Wainewright is added to this, theunique nature and extreme rarity of these works in the Australian colonial context is indesputable.