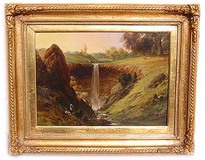 The Wannon Falls
Victoria, circa 1860
39.5 x 53 cm
The Wannon Falls are found near Hamilton in the rich Western District farmlands of Victoria, and became one of the most popular subjects for landscape painters in the colony. Thomas Clark was to make painting the Falls his speciality and several views by him of the Falls are known, including a very similiar work that is now in the Australian National Gallery. Clark had been awarded a gold medal for landscape painting by the Royal Society of Arts in England and he continued to be recognised in the colony, along with his contemporaries Eugene Von Guerard and Nicholas Chevalier, for his fine brushwork and romantic effects which were so much in demand by local pastoralists.
<