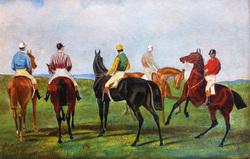 Gathering for the Start of the Christmas Handicap
Burenda Races, Queensland, 26 December 1874
Oil on board
Signed
15 x 22.5 cm
“Burenda Station”, which was situated approximately 100 km north east of Charleville, Queensland, was a large pastoral holding owned by Mr Gordon Sandeman, a past member of both the NSW (1856-57) and the Queensland (1863 – 70) parliaments. The Rockhampton Bulletin of 30 September 1875 reported that it covered between 900 and 1,000 square miles and held a stock of over 105,000 sheep, 3,000 cattle and 200 horses. There were “six commissioned officers, two aidecampes and 150 – 230 rank and file” working on the property with extensive buildings, six major dams and even its own branch of the Queensland Savings Bank.

To this property Henry Gordon Horsford Sandeman, known as Harry, arrived on a visit to his relative Gordon during 1873-74. Fortunately a very good record of the visit exists in a manuscript journal that Harry wrote of the time and which is now held in the National Library of Australia, titled Gone Out to Australia (MS 3628a). The extensive hand-written observations in the journal cover a period of approximately ten years, and along with the written account there are a large number of accompanying drawings which, although often several pages away, are sequentially related to the text and numbered.

Harry arrived at “Burenda” after travelling from Brisbane via Roma and appears to have quickly got into the lifestlye and work expected on an outback station of that period. He mentions camping out and looking after a group of 30,000 sheep and also courageously stopping a knife fight between an Irishman and a Chinaman and then on page 78 of his journal we find that “a happy thought came to me, we would hold a race meeting”. Not shy in coming forth he further reports that “intense excitement followed, a brilliant idea, said one, symptom of Christmas said another. The festive season was drawing near and the races would help to keep the men away from the pubs.” Harry writes that a purse of P100 was raised, as confirmed by an article in the The Brisbane Courier 16/1/1874 which mentions the Boxing Day races at Burenda. The races at Burenda were always for only grass-fed horses, as Harry mentions on page 81 and is further referred to on reporting of a later Burenda race meeting in The Queenslander of 18 July 1874. The races were a very big event and a booth was set up for drinking, “although an incomplete arrangement” (p. 80), and Harry even saw a money making chance; “I bought all the whips in the store and gave them to one of the men to sell at a good profit” (p.80).

Several races were held on the day and the “Xmas Handicap bought out five, Darby Kelly was again favourite, D.K. winning by a length” (p. 81). It is worthy to note that Harry also owned Darby Kelly at the time, his journal explaining that he leased him from an old sheperd (p. 79) and possibly because of this connection he drew the horse (illus 287) and the finish of the Christmas Handicap (illus 293). Harry states that the rules for silks, costumes and boots were strictly adhered to (p. 82) and it is interesting to see the lively colour of the finished oil painting when compared to its related black and white illustration, The Finish, in his journal, although the distinct nature of the colour and dress of each horse and rider is still recognisable in the sketch.

There are only a few known oil paintings, all small in size, by Harry Sandeman but his painting of the Gathering for the Start of the Christmas Handicap and the illustrations found in his journal indicate that he was a very competent artist that drew faithfully what he observed. Horse racing was obviously a favourite pastime as all known paintings by him are of horse related subjects and he often mentions his horsemanship skills in his journal entries.