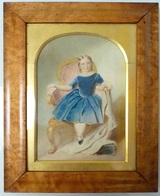 Portrait of Miss Marion Fletcher, 1851.
Watercolour
Signed and further inscribed and dated verso
21.5 x 15.5 cm
The artwork depicts Marian Fletcher who was a daughter of David and Ellen Fletcher (nee Hilder) who married in 1843. He was a dentist who lived at ‘Fletcher’s Glen’, Bondi and was the first Mayor of Waverley in 1868 (it was called Chairman of Municipality before that). Her younger brother was David J. C. Fletcher and records have him baptised at St Phillips in 1852. We know Marian Fletcher married William Quigley in Sydney in 1887 and had a girl and two boys, and that after her husband’s death in 1893 she remarried a Francis Manning in 1896.