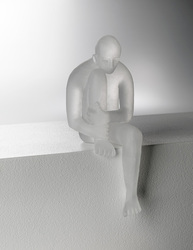 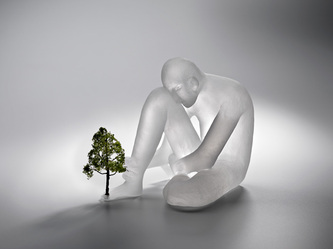 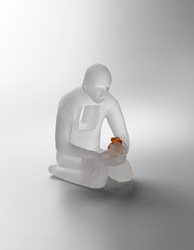 Matt Burgess (Aust, 1985) completed a degree of Visual Arts (Specialisation) at the University of South Australia. He majored in glass and minored in jewellery. His glass work explores the human form, looking at the human condition. He casts his glass using the lost wax technique.

2010
Everything we breathe, Michael Reid at Elizabeth Bay, Sydney NSW

2008
Everything to this, Peter Walker Fine Art, Adelaide SA

2011
Christmas Essentials 2010, ‘A Brush With Desitiny’, article by Gary LaPersonne.

About the Lost Wax Technique

Lost Wax Technique For Glass CastingI melt a hard wax in a bain-marie and add thirteen percent paraffin oil. This helps to make the wax more malleable. After the wax has melted and the paraffin oil is mixed in, I pour the wax into a baking pan and let it set for a couple of hours.

Moulding the wax is one of the most time consuming aspects of this technique, well it’s the most labour intensive on my behalf. It takes me approximately five – twenty hours to mould one figure. The scale of the figure does not determine the time taken; it is the way the figure is positioned.

After the figure is created I attach a reservoir, which is a cone shaped like addition to the figure. This is for the glass to pour into once it is set in the mould; I need to attach this to the figure now, as it is made out of wax too. I usually attach it to the bottom of the figure as this is the best angle for the glass to pour into. Once the figure is created, I clean it up with a lite flame to smoothen the surface of the wax. This eradicates my fingerprints and other surface marks.

Before I can make the paster / silica mould I need to build a wall, for the paster /silica mix. The walls are made of wood, and are held together with clamps. They are built around the figure. I fill in any gaps with clay so that the plaster / silica does not leak while it sets.

Okay, now is time to make the plaster silica mould!! I fill half a bucket with water and add one handful of paster and one handful of silica. I add a handful of each until it reaches a consistency I am happy with. I pour the mixture into the container I made with the wall. I generally leave the plaster / silica for half an hour just to let it set, and then remove the walls and clay. The end result of this is a rectangular white solid box with a wax figure inside.

I place the plaster / silica mould in a drying cabinet over night to get out the moister out.

After leaving the mould in the drying cabinet I melt out the wax figure, using the steamer. This usually takes about 20 minutes.

When I pull the mould out of the kiln, I leave it for a day before I crack the mould open. This is because there is still heat within the mould and glass. Not much, but it is enough to crack the piece.

After the figure is out of the mould, I clean all the remaining bits of plaster / silica off the glass. I can now cold work; I cut the reservoir off to begin with. I use a variety of cold working equipment to clean the figure and to achieve a finish I would like to achieve. This can take quite some time.
<