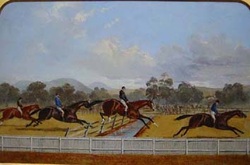 The 1869 Ballarat Autumn Steeplechase.
At the water-jump with Birthday, Ingleside, Babbler and Sea King running.
Oil on board
Signed and dated 1869
41 x 62 cm
Provenance: Private Collection, England
Phillips London, Lot 113, December 17, 1985. £22,000.
Private Collection, Sydney
The 1869 Ballarat Autumn Steeplechase was held on Friday 14 May. One of the most important events on the Victorian racing calender, it was run over four miles and had a prize purse of 100 sovereigns. The horses painted by Thomas Lyttleton taking the water-jump were Birthday owned by Mr Thomas Bailey, followed by Ingleside owned by Mr Orr, then Babbler, another of Mr Bailey's horses and finally Mr Carmichael's Sea King.

Eight horses were nominated for the race which the Australasian described as the "last great prize of the season" (May 15, 1869). Two great horses of the time, Babbler and Ingleside, were competing in the field and it was Ingleside who was the favourite in the betting at 2 to 1 against followed by Babbler at 5 to 2.

Contemporary reports describe the race and have Dutchman leading over the first part of the course but "coming a purler before the last turn leaving the lead to Birthday who with Ingleside, Babbler, Sea King and Wannon, in that order cleared the water-jump in fine style" (Australasian, May 15 1869). Birthday suffered though from his earlier win that day in the Selling Steeplechase over three miles, and it was left to Ingleside and Babbler to fight for the finish. Babbler took the lead with three-quarters of a mile to go and went on to win by a dozen lengths.

Babbler and Ingleside were both champion horses of their day and fought out many races. Their fame was great. They were regularly mentioned in the press and the public's interest in them saw their names in more than just the racing pages. Babbler, for example can be found in a poetical prophecy by W.J.E.H. in the Australasian of October 15, 1868 while Ingleside is a subject found in Part IV of Adam Lindsay Gordon's poem Hippodromania, The Bankers Dream.

Interestingly, Adam Lindsay Gordon was widely regarded as one of the best steeplechase jockeys of his day and he regularly rode Babbler to many of his historic wins, and at various times trained both Babbler and Ingleside, two of the horses in the Lyttleton painting.

In the 1860's racing colours did not have to be registered, and even those that were often did not get used as the jockeys wore what they had brought to the track. Horses were regularly sold after a race and ownership could sometimes change hands several times in one day. In Lyttleton's painting it can be ascertained, by referring to other Lyttleton works and contemporary reports for comparison, that Mr Orr's colours were that of the black jacket with red sash and Ingleside is being ridden by Johnson. The jockey up on Babbler is Mr W. P. Bowes, an owner himself, wearing his colours of blue with a black cap that can be seen registered by the V.R.C. in the 1871 Australasian Turf Register. The report of the race in the Australasian tells us that Birthday was ridden by Howell and Sea King by Ferguson.

The Ballarat Turf Club was located seven miles from the township on a 460 acre lease. The steeplechase course was over a distance of four miles and the setting of the water-jump is painted by Lyttleton with the general public seen on the outer course, including a small group of aborigines caught up in the excitement of the moment, several even mimicing the jockeys by riding the rails of the fence. Lyttleton has painted a scene in stark contrast to that which he would have generally encounted as a person of privilege in the staid respectability of the members enclosure. Lyttleton's depiction of the horses stride is typical of the period as it was not until photography was widely available that it was realised that horses legs when galloping did not go forward and behind at the same time. The jockeys riding style was also typical for the 1860's with long reins, low stirrups and an upright riding position, while Lyttleton's knowledge of horses is evident in such fine detail as the horses ears being back when flat racing but 'pricked up' in concentration when jumping.

Thomas Hamilton Lyttleton was born in Tasmania on June 10, 1826 at the family property "Hagley" near Launceston. He came from an upper class family and led a life that was typical for the sons of the wealthy of this period.

At 27 he married Emily Fenton in Hobart and was to have two sons and two daughters with her. In 1851 he moved to Victoria and joined the Police Force and by the 1860's had risen to the rank of Superintendent of the Melbourne Metropolitan Police Force. Sadlier, in his Recollections of a Victorian Police Officer, says that his appointment was not a great success as "although by birth and education he was a gentleman he was wanting in some of the qualities requisite for so important a position" (p. 119)! Lyttleton's social standing can be gauged by his membership of the Melbourne Club from 1853 as well as his memberships of the Yorick and Athaneum Clubs, and his interest in horse racing can be seen in his position as a committee man of the Castlemaine Turf Club. Lyttleton was superannuated from the police force in 1874 due to poor health.

Lyttleton's paintings are now extremely rare but the records indicate he had a strong interest in painting horse race and sporting pictures. The VATC owns a painting dated 1856 of Free Trader, the winner of the first Melbourne Hunt Club Cup, and four horse pictures were exhibited by him in the 1866 Melbourne Inter-colonial Exhibition. He painted several steeplechase races and of note is the fact that Adam Lindsay Gordon is in, or related to the subject, in many of his works.

Thomas Lyttleton's artistic skills can be recognised in his position as a foundation member of the Victorian Academy of Arts and he exhibited ten works in their exhibitions from 1870-1872. The Australasian of May 15, 1869 makes note of an exhibition of his sporting pictures which include steeplechase works, and both Babbler and Ingleside are mentioned as being in the paintings with Mr Orr and Mr Johnson up, both riders and horses also seen in the present picture under discussion. The Australasian goes on to say that Mr Lyttleton shall "doubtless be as successful as his friends can wish".

Thomas Lyttleton retired in ill health to Drysdale in Victoria and died on 23 January 1876.