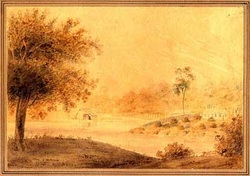 Major George Johnston was born in 1764 and came to Australia with the First Fleet as a First Lieutenant in the Marines. He was reputed to be the first ashore at Port Jackson when the fleet landed in 1788 [1]. Johnston was a highly influentual member in the society and ruling class of early Sydney with many actions and decisions affecting the colony bearing his influence. He was at various times in and out of favour with the Governors of the colony, holding numerous positions of responsibility throughout his life, and was a popular officer of the New South Wales Corp. In 1800 he was promoted to a Brevet Major but at the same time was sent to England due to concerns with his involvement in the rum trade. In 1804 he gained recognition for his suppression of an armed rebellion at Vinegar Hill, but the critical point in his career came with his decision in 1808 to arrest Governor Blight and assume the Lieut-Governorship of the colony. Johnston had sided with the landholders and particularly John Macarthur in his decision to overthrow Bligh but argued that his decision was made with the backing of the majority of the population. He was court-martialled in England in 1811 for his actions and found guilty and cashiered from the army, but the Colonial Office still provided him with passage back to New South Wales in 1813. Johnston was to build upon his wide property, trading and farming interests in the years ahead and became a frequent guest and received many favours from Governor Macquarie. He died in 1823 [2].

In Sydney Johnston maintained one of the finest estates, Annandale, but he also held an extensive amount of property throughout the colony. Land Grants to Johnston and his family established him as one of the largest landholders and his holdings at his death included areas of Sydney, Petersham, Bankstown, Cabramatta and Lake Illawarra [3]. Johnston's land holdings were very complex [4] and with the colonial frontier mentality prevailing at the time often land was just occupied, no matter what the actual legal claim to the property was, particularly when required by the members of the powerful military forces. Johnston's granted land in the Bankstown region seems to have been predominantly situated around the George's River and included 172 acres granted in 1798 and 72 acres granted in 1804 while his son George Junior received 500 acres in 1803. Lieutenant James Finucane in his journal notes that Johnston "had a good house and extensive farm on the Georges River" [5] and it is known that his property was used as an outpost for Government Forces as early as 1803 [6]. The farmhouse, "George's Hall", was on the junction of the George's River and Prospect Creek, at Marquee Point, and according to maps held in the N.S.W. State Records Johnston held land on the other side of the creek too [7]. These are the properties depicted in the watercolour by George Johnston Junior. Interestingly, a handwritten notebook that details the furniture held in each room, and the names of the servants at "George's Hall in 1809 can be found in the Johnston Papers at the Mitchell Library, Sydney [8] while today the suburb of Georges Hall takes its name from this property [9].

The watercolour by George Johnston Junior measures 12.5 X 18 cm, is signed and dated April 1805, and is tipped down on a contemporary sheet of paper. To the reverse, in a contemporary hand, is the inscription "Major Johnston's House, New South Wales. Drawn by his Son", and this is again repeated on an old label on the backing board of a mid-nineteenth century frame that the work was found in.

George Johnston Junior, the eldest child of George Johnston and his convict partner Esther Julian, was born in Sydney on 12 January, 1790. He had a short military career [10] but was to spend most of his life farming on his and his families extensive landholdings. He was said to be surprisingly literate despite the educational opportunities available in the colony at the time, and obviously followed the gentlemanly pursuits required of him as a member of the upper echelons of Sydney society [11]. George Junior died in a riding accident on John Macarthur's property at Camden in 1820. In a letter of condolence to his father Macarthur said, "Your son was an Honor to his Name, his Family, and the Country that Gave him Birth, of which he was one of the brightest ornaments" [12], and Governor Macquarie also spoke highly of him when expressing his sympathies.

The watercolour of his father's farm suggests that some training in the technique of watercolour painting was undertaken in George Johnston Junior's education and this would not be unexpected. It could be conjectured that he was taught some of his skills by the local artist and surveyor George William Evans who is known to have painted in a similiar style and depicted a closely related view [13]. George Johnston Senior had also travelled with Evans back to Australia in 1802 [14] and he was a resident and held public positions in the Parramatta region.

This watercolour is one of the earliest know positively identifiable depictions of the Bankstown region. A practically identical watercolour by George William Evans was sold by Christies London in 1996 [15] and is now in the collection of Mr Kerry Stokes [16]. A later related watercolour, attributed to Joseph Lycett and dated 1819, that depicts Major Johnston's property and the farmhouse on the George's River, is in the collection of the Mitchell Library in Sydney [17].

Early paintings and drawings of the fledgling colony of New South Wales are extremely rare, not least because the harshness of the conditions and the efforts required to establish an outpost in such a foreign land left little time for the pursuit of the Arts. The facts that the whole of the colony consisted of only 6,500 people in 1805 [18], and a large percentage of these were convicts, further contribute to the rarity of any artwork of this period. In this light the rarity and historical significance of George Johnston's watercolour of his father's farm is indisputable. However the value of this work is further enhanced, and of immense interest to the history of painting in Australia, because it is the earliest known artwork produced in Australia by a person born in the colony of European descent.