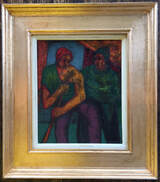 Horace Brodzky 1885 - 1969
​Boatmen, 1915
Oil on canvas
Signed and dated lower right and further titled signed and dated verso
28.5 x 23 cm
Horace Brodsky was born in Kew, Melbourne, in 1885. He was born into the family of Maurice Brodsky the Jewish owner of “Table Talk” which published widely on the Melbourne arts scene in the period leading up to the turn of the Nineteenth Century. He studied at the National Gallery School in Melbourne and followed this up with travel and study in the U.S.A. and then England. He was a strong supporter of the modern arts movement in London, and particularly the vorticists, and was an early member of the The London Group. In The London Group he exhibited with the likes of Walter Sickert, Spencer Gore and Lucian Pissaro and formed close relationships with many of the influential artists of the period such as David Bomberg, Jacob Epstein, Henri Gaudier-Breska, Ezra Pound and Wyndham Lewis. He travelled through Italy in 1911 with his friend, the American poet John Gould Fletcher, where he discovered the work of Piero della Francesca which became a major influence on his work.

In 1912 he was the first Australian artist to be included in the Venice Biennale of Modern Art, while in 1914 he participated in “Twentieth Century Art: A Review of Modern Movements”, at the Whitechapel Gallery, which was the most comprehensive survey of avant-garde developments in the art world at the time.
Boatmen is one of Brodzkys most powerful works and directly shows the influence of the modern art movement of the period with its dynamic colour and shapes that are used to depict the boatmen.

There are only three artworks of this period known, all painted by Brodzky (Boatmen, The Gardener, 1914 held in the National Gallery of Australia collection, and The Railway Station, 1914 which was on the UK art market in 2009) that are unique for an Australian artist of the period for their modernity and high pitched vivid palette colour when artists such as Hans Heysen were still painting the traditional gum trees of the outback. While De Maistre and Wakelin were to work with colour theories in 1918/9, their direction coming from the study of European art theory books, Brodzky had been experiencing the modern cubist, vorticist and related art movements directly in London and Europe half a decade earlier.