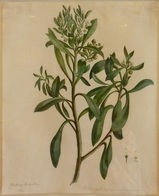 William Buelow Gould arrived as a convict in Tasmania in 1827. He had been sentenced to transportation for theft and was to spend the rest of his life in the colony. Gould is best known for his oil paintings of still-life subjects but it is his rare, finely detailed, watercolours which demonstrate his skill as a highly accomplished natural history painter.

First mention of representing flowers in his artwork can be seen in the diary of Robert Martin, who was the first officer of the Asia, the ship that Gould was transported to Australia on. He writes that Gould “seems to excel at flower painting”, and had a group of pictures done for his portfolio, while on November 24, 1827 he states that Gould has finished a drawing of a tulip.

Gould was not a vicious convict but had continual problems in Tasmania with authority due to his love of alcohol! This was to result in some harsh punishment and confinement at Hobart, Macquarie Harbour and Port Arthur during his years in the colony.

In Hobart in 1829 Gould was assigned to the Colonial Surgeon, Dr James Scott, who collected botanical specimens. Gould was to draw many works for him including the original illustrations for two 1832 articles Dr Scott wrote for Curtis’s Botanical Magazine which was published in England.

In 1832 he was sent to Macquarie Harbour and upon arrival on September 6 was assigned to Dr De Little, another doctor with a keen interest in natural history, and one who was again to use Gould’s drawing skills till his departure on June 22, 1833

After another run-in with authority Gould found himself arriving at the harsh penal settlement of Port Arthur on August 16, 1833. His skills as an artist again worked in his favour as he was initially assigned to the assistant surgeon Dr Thomas Coke Brownwell, and when he left in July 1834 he was almost certainly transferred to his replacement, Dr John McBaine. It is highly probable that Dr Brownwell collected specimens and had Gould paint them. The Myopotum insulare, which is inscribed “Betsey Island” which is in the vicinity of Port Arthur, was almost certainly painted during Gould’s Port Arthur stay.

There are very few of William Buelow Gould’s fine botanical studies in private hands, and only two known collections in public institutions, those being at the Allport Library in Hobart and the Queen Victoria Museum and Art Gallery in Launceston. Several records exist of the favourable comments that Gould’s studies drew. For example, in a private letter of 1831 from the botanist R. W. Lawrence to his friend in England, Mr W. J. Hooker, Gould was described as a “capital delineator”. On March 23, 1833 the Hobart Town Chronicle reported that Gould was a quality draughtsman who had drawn many specimens for Dr Scott while Gould’s biographer of 1980, Garry Darby, believes that Gould’s “fish and botanical drawings … remain the outstanding examples of Gould’s ability as an artist”.

The watercolour that is now available for sale gives a rare opportunity to purchase a fine colonial artwork, by a highly collectable convict artist from the early period of Australian settlement.