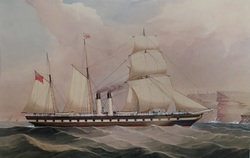 The City of Hobart was a two funnelled, three mast barque rigged vessel built by T Wingate and Company, Glasgow for the Tasmanian Steam Navigation Company in 1853. The City of Hobart arrived in Hobart in 1854, and then primarily ran the passenger and cargo service between Hobart and the mainland but her owners were not above venturing further afield, as for example when she took gold diggers from Melbourne to Port Curtis, Queensland in 1858 following the news of the gold strikes there and similarly to New Zealand in 1861. After 1865 she was usually on the Hobart Town -  Sydney route until she was sold in 1875 to W. Summerbell and converted to a collier. She broke her screw shaft on 25 July 1877 and water penetrated her holds so she was abandoned of Wilson Promontory in Victoria.

Frederick Garling was one of the eminent ship portraitist in Australia at the time and he is acknowledged as having painted most of the ships that entered Sydney harbour in his time. He arrived in Sydney in 1815 with his family and joined the Customs Department in Sydney in 1827 and remained with them till 1859. He was known to paint outside his office hours and there was strong interest for his works particularly from owners and Captains of ships that visited Sydney. Garling was a very competent watercolourist but little is known of any formal training he had although his copies of Augustus Earle’s works indicate he probably received some training from him in the 1820’s. His style changed little over the years although he always used high quality pigments and papers and although he rarely signed his works his characteristic style and working technique, where he built up his images with thin washes of watercolour, are a signature themselves. Several of his works also show the ships entering Sydney through the Heads with the South Head lighthouses and building obvious in the background, for example his watercolour of the clipper ship British Flag is painted with a practically identical view as that of The City of Hobart , and interestingly there size is identical too. A lithograph depicting the City of Hobart was printed in 1854 upon its launch in England and earlier photographic images of this artwork are held by the Archive Office of Tasmania (NS1013-1-1563).

The State Library of NSW holds a vast collection of Garling’s artworks primarily through the Jean Darling Bequest and held an exhibition of his works in its Picture Gallery in 2003.
​ 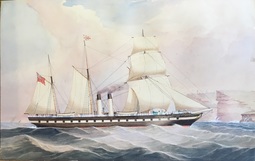 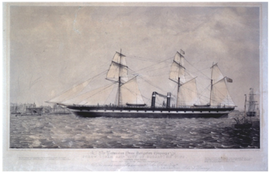 ​Lithograph of The City of Hobart passing Gravesend on her trial trip, Feb 23 1854. John W. Deering del., Day and Sons Lithographers to the Queen.

​The British Flag off Sydney Head, a similar work by Garling.