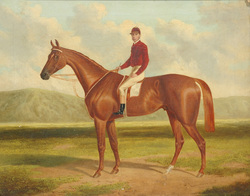 Falcon
​Winner of the 1864 Adelaide Cup.
A Painting by Frederick William Woodhouse

The inaugural Adelaide Cup was held on Thursday April 1864 in front of the largest number of spectators to have ever gathered for a horse race in the colony. The Governor with all of Adelaide society was in attendance and the grandstand became so full that a carpenter had to be employed at the last minute to prop it up with extra timbers unbeknownst to the spectators above!

The Cup was run over two miles and twelve horses contested the race with Falcon, “an immense horse, with a tremendous stride” (S.A. Register 22/4/1864, p.2), running out the winner. Mr P. Dowling, from Melbourne, owned the horse and his success continued with the second horse also carrying his distinctive maroon coloured silks. The artist has done a very precise portrait of his jockey Morrison who continued to ride Falcon on and off though-out the horses racing career. The settling meeting was held at the Globe Inn on Rundle Street and Mr Dowling was awarded the considerable sum of    1,042.5s for first place and  50 for second place.

Falcon, sired by Warhawk and out of May Queen by Forester, led a very successful racing career. He won many major races in addition to the Adelaide Cup. These included the 1863 Ballarat Handicap and Great Centre Handicap, 1864 Melbourne Helter Skelter Stakes, Autumn Handicap and Derby Stakes, 1865 Grand Stand and Trial Stakes and the 1866 Free Handicap. He was placed widely, including 3rd in the 1866 Melbourne Cup.

Frederick Woodhouse senior (1820 – 1909) was the pre-eminent colonial sporting artist of his time, and the head of what became a family of renowned sporting artists. His art studies begun in Britain at the Fitzwillam Museum at Cambridge and continued at the Royal Academy, London while he learnt animal painting under the tutelage of John Frederick Herring senior. He arrived in Australia in 1858 and quickly found success as an equine artist and was best known for painting every Melbourne Cup winner for the first 30 years of the race. He painted horses in all the colonies. He was represented in many of the major art exhibitions of the period and was a foundation member of the Victorian Academy of Arts. Woodhouse’s paintings can be found in all major Australian art galleries.