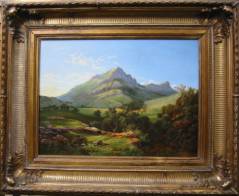 Mount Abrupt, Grampians circa 1864oil on canvas
46.0 x 61.0 cm
Provenance:
Private collection, London
Exhibited:
A painting titled 'Mount Abrupt' was included in the fourth Annual Exhibition of Fine Arts,
Charles Summers' studio, Melbourne, 1864, catalogue no. 46
By the 1860s, Australian colonial paintings of the romantic and the sublime in nature were at their height of attainment and popularity, the leading artists of the time providing engaging picturesque touches and added motifs of exotic appeal. Nicholas Chevalier's Mount Abrupt of circa 1864 is an exemplary example of this genre, which enjoyed the company of some of the finest panoramas and detailed transcripts of nature painted by his august contemporary, Eugène von Guérard. Chevalier and Von Guérard were the Colony's leading painters of the time, soon to be joined and then outranked in popularity in the 1870s by Louis Buvelot. In December of 1864 Chevalier's large painting, The Buffalo Ranges was awarded the £200 acquisitive prize of the newly founded National Gallery of Victoria, thereby becoming the first Australian painting to enter the Gallery's collection. It was joined two years later by Von Guerard's majestic Spring in the Mitta Mitta. Chevalier was also one of a number of Victorian artists who recorded the triumphs and tribulations of the Bourke and Wills expedition. His grand, historical painting, Memorandum of the Start of the Exploring Expedition, 1860, is in the M.J.M. Carter Collection of the Art Gallery of South Australia.

Nicholas Chevalier arrived in Australia in 1854, his landing place being Melbourne on Christmas Eve. His purpose was to pursue family business, though he later invited his fiancée to Melbourne and married her, staying some fifteen years, and becoming a prominent and well-liked member of Melbourne society. Singularly handsome, fluent in six languages, an accomplished musician, charming of manner and gifted in conversation, he played a very active part in the early years of the Melbourne art world. A popular cartoonist for Melbourne Punch, he was also a talented illustrator for newspapers such as The Illustrated Australian News, and produced many drawings, together with S.T. Gill for Victoria Illustrated, a book of engraved views published in 1857. Chevalier was a foundation member of the Victorian Society of Fine Arts, and regularly contributed to Victorian and Intercolonial exhibitions.

Chevalier and Von Guérard, although acknowledged as the leading Victorian artists of the 1860s, were not rivals, being closely associated and sharing similar interests. They travelled extensively in Victoria and New Zealand, and joined expeditions of scientific discovery. In 1858, Chevalier and Von Guérard went with the scientist Alfred William Howitt on his journey to the Dandenong Ranges and Baw Baw Plateau. A few years later, in April 1862, Chevalier was the official artist on Professor Georg Balthasar von Neumayer's magnetic survey expedition to the Cape Otway region and the Western District. They were accompanied by Von Guérard. Neumayer published the account of his expeditions under the title, Results of the Magnetic Survey. In early May of 1862, Neumayer noted that: 'In passing over the plains [as they made for the township of Dunkeld at the foot of Mt. Abrupt] we had several times beautiful views towards the Grampians and particularly towards Mts. Abrupt and Sturgeon.'1 He continued: 'On the 7th, Mr. Chevalier being engaged in taking some sketches of the neighbouring scenery, I went myself to the township to get some information respecting the ascent of Mt. William .' These sketches are almost certainly the genesis of this and other paintings of Mt. Abrupt. Taken back to his studio at 53 Spring Street, Melbourne, Chevalier worked them into the strikingly beautiful paintings we know today.

In the fourth Annual Exhibition of Fine Arts held in Charles Summers' studio in Collins Street east, Melbourne, in 1864, Chevalier exhibited thirty-six works. Mount Abrupt was catalogue number 46, followed by Mount Sturgeon and Mount Abrupt, which had already become the property of G. Webb, Esq. There were many other Western District paintings included, such as the well-known Mount Arapiles and the Mitre Rock 1863, now in the collection of the National Gallery of Australia, Canberra, and Mount Arapiles 1863 in the National Gallery of Victoria. It is impossible to say which of the two paintings of Mount Abrupt were exhibited, although it would seem likely that it was the signed and dated version, for artists tend to sign their works before exhibition. It could, of course, be argued otherwise, and that the signed work was a commission for a local landholder, our version being a replica painted in response to its popularity. Replicas and larger or smaller versions of the same painting were not unusual, as witnessed by newspaper comment at the time, and the existence nowadays of replicas, and versions large and small of particularly successful paintings. 2 In 1865, after Chevalier's Buffalo Ranges won the National Gallery 'prize', he received two separate commissions for smaller versions of the painting. There were also commissions for paintings of Mt. Sturgeon, Early Morning, each being a replica of the other. Chevalier was not on his own in this practice. A particularly well-known example is Von Guèrard's Spring in the Valley of the Mitta Mitta with Bogong Ranges, the 1863 version of which was purchased by John Ware, owner of Yalla-y-Poora in the Western District in the same year. (It later came into the collection of Dr Joseph Brown of Melbourne.) In 1866, Sir Archibald Michie commissioned Von Guèrard to do a larger version, which he then gave to the National Gallery of Victoria the first by this artist to enter a public collection. Many other similar examples by Von Guèrard could be mentioned, his painting of Lake Gnotuk, for example, going into several versions and finally residing in public galleries as far apart as Ballarat and Newcastle. Then there is Louis Buvelot, his two paintings, Upper Falls on the Wannon of the early 1870s being almost identical. They are now in the Bendigo Art Gallery and the Art Gallery of South Australia.

Notions of originality in art today differ from what they were a hundred and more years ago. Artists made pictures; and if they were popular, they repainted them according to demand. S.T. Gill's popular watercolours of the goldfields were frequently repeated, and he received important commissions for sets even twenty years after the gold rushes were over. Two identical versions of Chevalier's painting, Mount Abrupt, are known, as detailed above. Although our Mount Abrupt is unsigned, style and technique confirm that it is a masterly painting by Nicholas Chevalier. This grand painting is stylistically redolent of its time, portraying the romantic and sublime in nature, with appealing touches of the picturesque. The sky is blue and almost cloudless, as, drawing towards day's end, the sun's rays bathe the peaks and fields in a golden light. In the foreground, Aborigines and their dogs camp beside their mia- mia and log fire, the red garment of the reclining figure providing a strong colour note, his pose a reference to the neo-classical set within an antipodean arcady. In the middle distance cows graze contentedly in peaceful co-existence, in a country of plenitude, a metaphor of reconciliation in the harmony of all things. The subject is one of Aboriginal and pastoral peace, held within the arm of nature and surmounted by the noblest of peaks.

In late 1868, in preparation for leaving Australia, Chevalier decided to sell his entire art collection, including his own works. In a review of the sale, the Argus art critic singled out several of Chevalier's pictures for special comment. Mount Abrupt was among them. The comments are worth repeating for the insight they provide into nineteenth century aesthetics, and the singular praise given to this painting.

"Mount Abrupt" (No.5) and the "Falls of the Wannon" (No.4) are to our taste, however, two of the most noteworthy paintings in the list. Of the two "Mount Abrupt" is the finest. The artist has caught the true spirit of Australian scenery. The wild and rugged mountain, the undulating grassy plain, the tiny creek trickling painfully through masses of boulders, the scanty rugged bushes, and, above all, the dim hot haze that broods over the distant slopes, combine to form a picture eminently Australian in its character. The composition is careful. The pyramidal form of the brushwood in the foreground is excellently managed, and the tender air tints of the mountains have been unsurpassed by the artist in any of his previous pictures. The whole composition is rich in colour, and abounds with careful studies and delicate manipulation.

It is impossible to say which of the two paintings of Mount Abrupt received such praise, for they are virtually identical. Perhaps the signed work was already in private hands, and the unsigned version remained with the artist, eventually taken by him back to London, where it was recently rediscovered. If so, then our work can claim this praise. There is some contemporary support for this reasoning, for, in a review in the Melbourne Herald of the same collection of works of art, the writer commented: 'Among the oil paintings by Mr.  Chevalier, there is one of Mount Abrupt, which we believe has not been exhibited before.'4 The Mount Abrupt shown in the fourth Annual Exhibition of Fine Arts in Melbourne in 1864 would, therefore, seem to have been the signed version.

The contemporary popularity of this landscape painting is confirmed by its publication as a tinted lithograph, Mount Abrupt and The Grampians, published in 1864 as one of a number of plates in Charles Troedel's Melbourne Album. It is described as having been taken from an 1864 painting by the master; and is closely related both topographically and pictorially to the two versions in oil. The view of Aboriginal arcadia, however, is dispensed. With a good eye to business, Chevalier altered his lithograph to appeal more to European taste, introducing the antipodean version of the fox hunt, as settlers mounted on trusty steeds pursue the kangaroo, demonstrating that such 'civilised' pursuits of the British can likewise be indulged in the great south land. This was not the only time that Chevalier had made such changes. His chromolithograph, Wannon Falls of 1865, has an exploring party of Neumayer, Chevalier and another European in its foreground. In the 1866 oil painting of the subject, now in the collection of the Art Gallery of Western Australia, the Europeans are replaced by three Aborigines, with one again wearing a bright red robe.

Mention, so far, has only been made of Chevalier's Australian achievements. Born in St. Petersburg, Russia, of a Swiss father and a Russian mother, he grew up there, in Lausanne; and studied in Munich and London. Internationally, he was known for having designed a setting for the Koh-i-noor diamond, illustrating The Discoveries in The Ruins of Nineveh and Babylon, and exhibiting watercolours at the London Royal Academy. This was before he came to Australia. While here, he was well to the forefront in introducing chromolithography to Australia in his 1865 Album of Chromo Lithographs. Two year's later, he designed decorations for the state visit of the Duke of Edinburgh, travelling in Victoria with the royal party as press representative. He was then invited to join the Duke on board H.M.S. Galatea for the tour of the Pacific Islands and the East, before eventually returning to London. Here he received numerous royal commissions from Queen Victoria and other members of the royal family; played second violin to the Duke in the Royal Amateur Orchestral Society; and occasionally exhibited in the Paris Salon and the Royal Academy. At the Crystal Palace, London, in 1872, he held a joint exhibition with another artist with Australian connections, Oswald Brierly. In 1882, Chevalier was appointed London advisor to what was then called the National Gallery of New South Wales. Today, his work is in leading public collections and art galleries in Australia and New Zealand. He is likewise represented in the India Office Library, London, and the Royal Library, Windsor Castle.