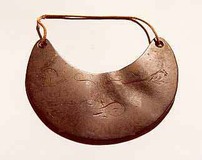 Aboriginal Breastplates were widely presented by the European settlers to the indigenous people of Australia in the nineteenth century. They are now extremely rare items with most examples being held in museum collections.

Research into the origin of individual breastplates is hampered by the poor literacy skills ofthe early settlers. The use of localised words and phonetic spelling for names and places is not uncommon. Tindale best sums this up in his book, The Aboriginal Tribes of Australia, with his statement that "variants are legion under the barbarous methods by which many English speakers attempt to match any unfamiliar term they hear against some unspecified English word model to which for the moment it may bear resemblance". Fortunately, however, some contemporary documents exist that help when researching aboriginal names, not least of these being the Government Blanket Returns that list the natives who were presented blankets in various regions by the government representatives of the day.

The missionary William Watson states in the Blanket Return he made for the government from Wellington Valley in 1834 that many natives attended, "some from 100 miles away". He lists a "King Bobby" as the first to receive a blanket, and states that his aboriginal name was Moorrogobben, he was 40 years old and had two wives. When combined with research on the Wellington Valley area it is highly likely that this is the "Bobbey" that was the wearer of this breastplate.

Research of, and comparison with, known breastplates identifies this breastplate as being of pre1850 manufacture. Extensive research of maps and gazetteers of Australia for the 1830's and l840's has found no location that can be matched or even loosely ascribed, by direct or phonetic comparison, with the name Mungey except for the Police and Incorporated District of Mudgee. Wells Gazetteer of 1848 lists Wellington Valley as being situated at the junction of the Macquarie and Wellington Rivers, and Wellington is approximately 35 miles from Mudgee.

It can therefore be said with some confidence that this breastplate was worn by "Bobbey" who was a chief of one of the Wiradjuri groups that was located around the Mudgee District of NSW.
<